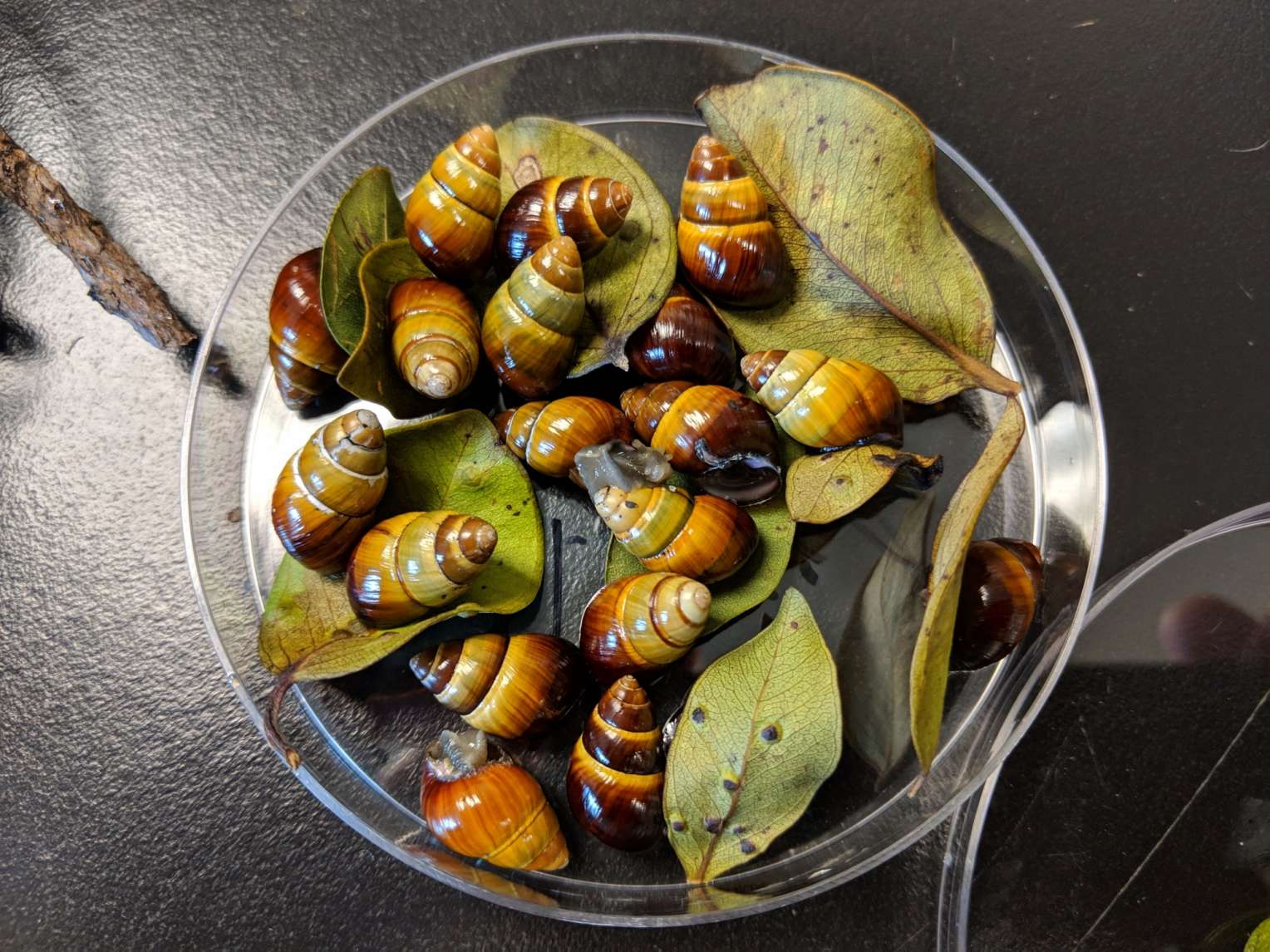 A World in a Shell: Snail Stories for a Time of Extinctions

I am currently finishing work on a new book focused on the disappearing land snails of Hawai’i. While I’ve tried to make all of my books accessible and engaging, this is the first one that I’ve written in a deliberate effort to speak to a general readership.

Below is a short blurb on the book.

I looked down at a single snail alone in a small plastic container, now all that remained of its species. Millions of years of evolutionary history condensed into its tiny form; countless generations of life reduced to this one, fragile, slimy little being.

I’m not sure how it happened, but I’ve somehow found myself captivated by snails. To be specific, my interest centers on the land snails of Hawai’i. These islands in the middle of the vast Pacific Ocean were once home to one of the most diverse assemblages of snails found anywhere on earth, roughly 750 species of all shapes, colors, and sizes. The Hawaiian forests were thick with them: 19th century naturalists described them as living jewels hanging from the trees like clusters of grapes. Today, however, the vast majority of these species are extinct, and most of those that remain are headed swiftly in the same direction.

These snails offer a unique and important window into our current period of mass species extinction. Unbeknownst to most people, this is a crisis in which snails are leading the way: worldwide there have been more documented extinctions of snails than there have been of mammals and birds combined. And yet, snails are largely ignored in public discussions of extinction. In fact, so are most of the invertebrates: the species that crawl, creep, buzz, flutter, and slime, and that make up roughly 99% of the animal kingdom.

A World in a Shell draws readers into the disappearing worlds of Hawai’i’s snails, seeking to cultivate an appreciation for these often-overlooked creatures. It is a richly storied narrative nonfiction book that brings research in the humanities and the natural sciences into conversation with my travels and conversations to offer a broadly accessible and engaging text for a general readership. At the heart of this book is a simple question: How might taking these snails seriously help us to rethink and engage differently with our escalating extinction crisis?

The answer explored in this book is that doing so draws us into an understanding of species loss as a process that is simultaneously biological and cultural: one that ripples out into local lives and landscapes; one that must ultimately be appreciated for its deep particularity across evolutionary, ecological, historical, and cultural, registers; and yet, one that, when storied well, might provide openings into a set of broad philosophical and ethical questions, requiring us to think differently about our place in the world, about our shared lives, and about what else might still be possible.

In bringing together a collection of snail stories for this time of extinctions, this book travels through a series of key sites in Hawai’i: from forests and laboratories, to museums and an Army live-fire range littered with unexploded ordnance. It explores the central threats to snails, as well as the passionate efforts of conservationists and other local people to protect them, including through elaborate fenced enclosures in the forest and a captive ‘snail ark’. Woven through these stories is an exploration of some of the remarkable features of snail life, from their modes of perception and slime-centered navigation, to their social and reproductive proclivities; it considers the immense journeys that brought them across oceans to these islands, likely as stowaways on migrating birds; it takes up their intimate relationships with Kānaka Maoli (Native Hawaiians) as expressed in chants, songs, and stories, but also in ongoing struggles for land and culture. In short, it explores the world of possibilities and relationships that lies coiled within each of their tiny shells.

In paying attention to snails, this book aims to thicken our sense of what is at stake in extinction. It shows that the absence created by the loss of a species is not a nothingness. Rather, it is an ongoing unravelling that ripples out into the world in myriad ways, cutting across imagined distinctions between ecology and culture, drawing us all in differently. To this end, it emphasizes the way in which the loss of Hawai’i’s snails, and extinction more generally, are tangled up in larger processes of globalization, colonization, militarization, climate change, and more. How, for example, did the U.S. Army become one of the largest funders of snail conservation in the Hawaiian Islands, and how does this situation connect to a broader pattern or military impacts on endangered species, from blowing them up to intensive efforts to secure their populations in captivity? How is the work of shell collecting, alongside its vital taxonomic and conservation significance, also a product of a colonizing project in which the landscapes of Kānaka Maoli where physically transformed while being reimagined and renamed in line with foreign desires? Paying attention to these larger, longer-term, processes is vital to understanding the specific causes of extinctions, but also their profoundly unequal impacts.

Ultimately, A World in Shell is an effort to tell stories of extinction and environmental change differently. It is a book that draws elements of nature and popular science writing into conversation with the emerging field of the environmental humanities. In this way, it aims to cultivate a sense of wonder and appreciation for our damaged planet while attending to the complex, historical, cultural, and philosophical, questions that might transform what we thought we knew, and so enable us to respond better, to appreciate differently, and perhaps even to hold open room in the world a little longer for snails and for countless other threatened forms of life.

1. The wanderers: A foray into worlds written in slime

2. The drifters: The mysterious deep time movements of snails

3. The collected: The ongoing colonial entanglements of shells

4. The unknown: Taxonomy and the unseen extinction crisis

5. The exploded: Solidarity and military snails

6. The captives: Care in a time of loss