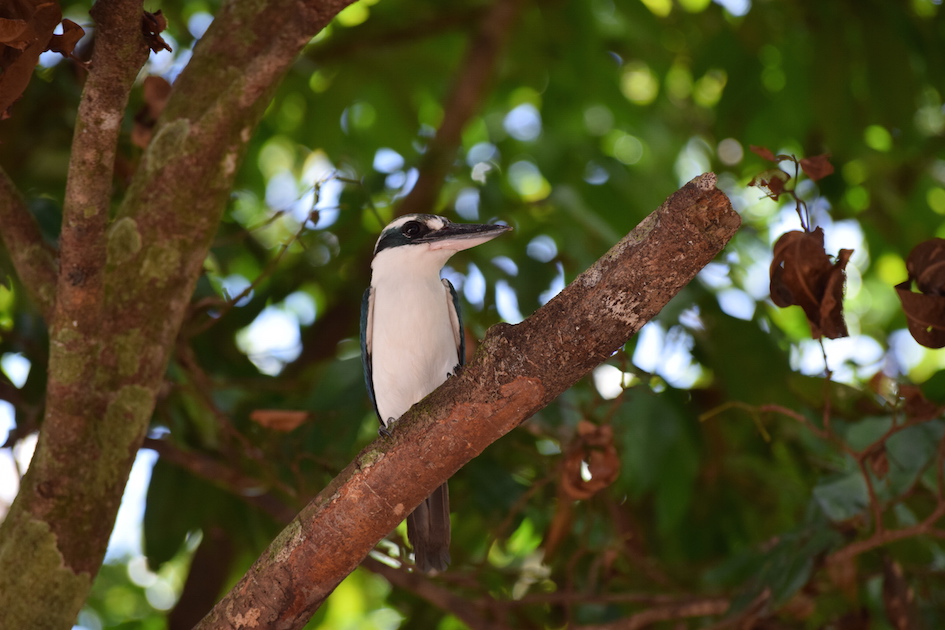 In May and June of 2016 I travelled to Guam and Rota in the Mariana Islands on a research trip. My focus was the critically endangered aga or Mariana Crow (Corus kubaryi). During the trip I took photos of a range of related things. A few of them are included below.

High resolution copies of these photos can be found at my Flickr site by clicking on the images below.

This beautiful mural can be found in downtown Hagåtña, Guam. It depicts a Ko’ko (Guam Rail, Gallirallus owstoni). Now extinct in the wild on Guam, I was lucky enough to get to see some of these birds in captivity on Guam. Hopefully they will start being released soon on nearby Rota.

One of the many spectacular coastlines on Rota, CNMI.

One of the few decent photos I managed to get of a free living aga (Mariana Crow, Corus kubaryi). These birds are now critically endangered: extinct on nearby Guam and in decline on Rota.

This massive fig tree grows by the side of the south road on Rota, CNMI.

A building has fallen on this machinery (a crane?) in the most recent typhoon.

A Collared Kingfisher (Todiramphus chloris). A very common bird on the island of Rota, CNMI and other nearby islands.

A traditional Chamoru coconut crab trap. The coconut has been cut open and tied to a small tree to attract crabs and stop them caring it away. The trapper will return at night and collect all the crabs feeding on the coconut.

Pandanus trees burnt in a fire on Rota, CNMI. Likely caught up in some of the very unpopular burning being done by a few hunters trying to make it easier to spot prey from the road.This is a serious and ongoing conservation issue, both for the island’s jungle and for the surrounding reefs that catch all the runoff from cleared/burnt land.