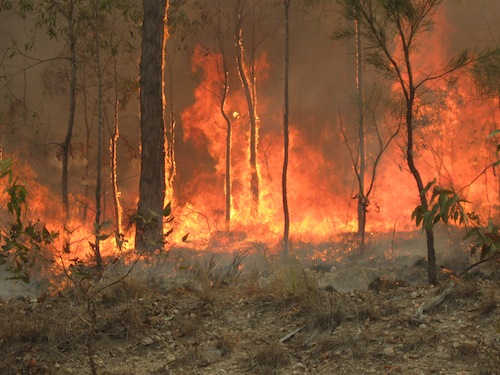 A few days ago Adam Bandt, the Deputy Leader of the Australian Greens, made a statement connecting the current bushfires in New South Wales with the government’s inaction on climate change. Immediately, critics pounced on the statement. Predictably, Greg Hunt, the Federal Environment Minister, accused Bandt of “politicising human tragedy” (link).

The underlying premise of Hunt’s position is that not to speak about climate change at this time is a politically neutral act. In reality, however, Hunt – just like all of those other politicians who have made similar ‘pleas’ during past severe weather events and ‘natural disasters’ – is here making a calculated effort to depoliticise these fires. To be clear, depoliticisation is not politically neutral, it is itself a political tactic aimed at disavowing relationship and so responsibility. In this case, the relationship is that between government inaction (including deliberate obstruction of others’ actions) on climate change and these deadly fires. But the relationship is clear and incontrovertible.

Four years ago when Freya Mathews and others pointed out this same relationship in the aftermath of the tragic Victorian Bushfires, they too were shouted down for “politicising tragedy” (link). The intervening years have seen little genuine action on climate change in Australia. It seems that we, yet again, retreated into the comfortable notion that the big disaster was now behind us and we could avoid any meaningful change in course (1).

In this context of deep-seated cultural amnesia, I’d like to suggest that any genuine form of responsibility must find a way to force the relationship between climate change and disaster into the spotlight during the event, when the consequences of our decisions on climate change are so vividly and painfully on display. None of this is to diminish the significance of this tragedy. Rather, it is to do the difficult work of actually taking this tragedy seriously, in all of its uncomfortable complexity. It is to insist that we do not allow it to yet again be severed from its causes and quickly forgotten. To raise these issues at this time is a plea that scorching flames and blackening smoke might burn into our minds and hearts the reality of the world that we are ushering in.

____
(1) For further discussion of the comforting notion that the ‘big one’ is behind us, on fires see Tom Griffiths “We have still not lived long enough” and on floods see Emily O’Gorman Flood Country.