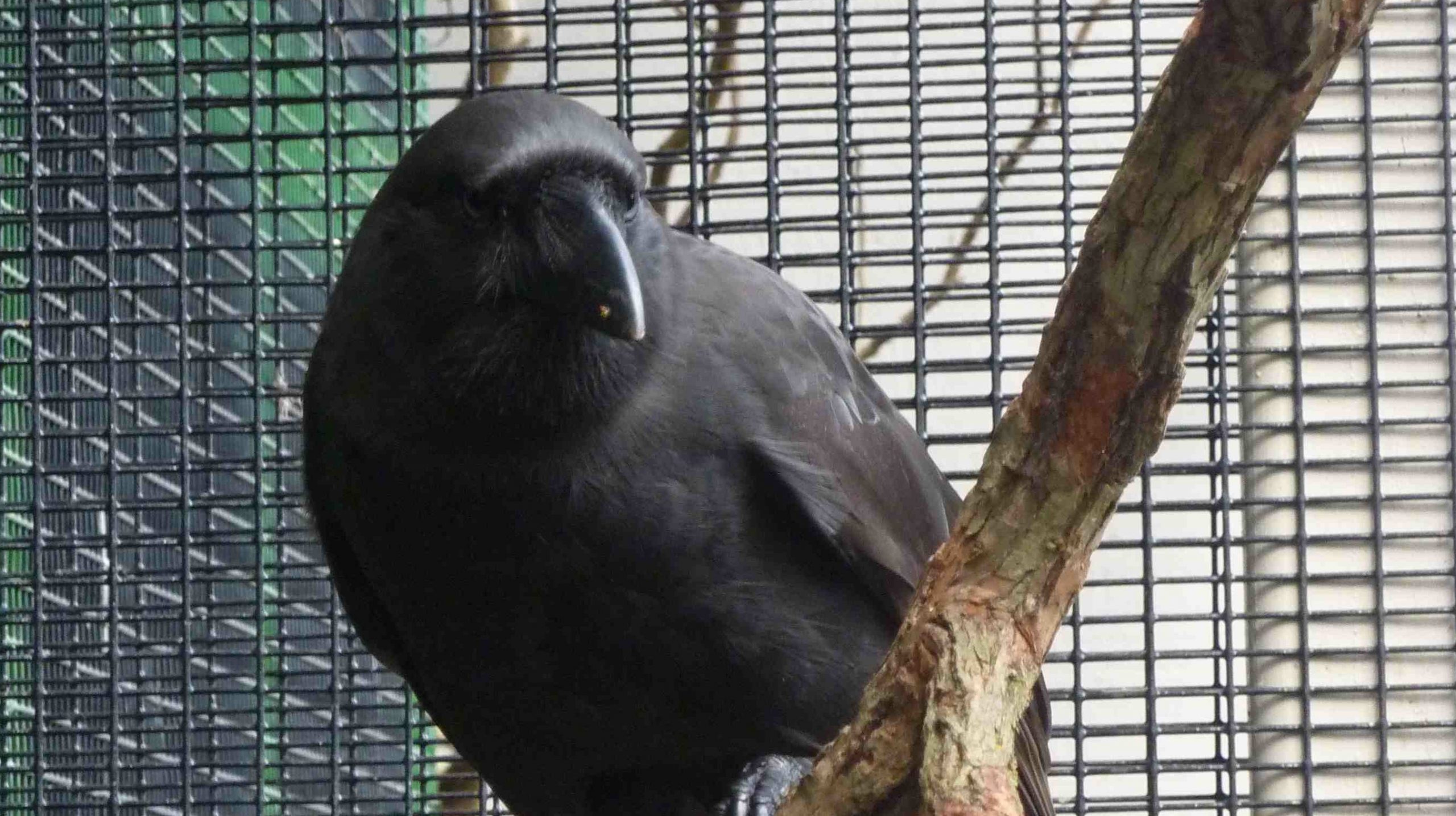 Conservation in haunted landscapes: In 2002 the last free living Hawaiian crow died. As of this time, the only surviving members/participants of this species have been required to live their lives in captivity, subjects of a long running captive breeding program. While it is hoped that one day soon they will be able to be released back into the forests of Hawaii’s Big Island, before that can happen there is much that needs to be done.

Unlike many of the more familiar crow species, the Hawaiian crow (or Alala) is strictly a forest bird, a fruit and flower specialist that has not adapted to a life of scavenging in human dominated landscapes. Perhaps if these crows had taken up a life of scavenging they would have faired much better after the arrival of Polynesian peoples and then European/American colonizers. Instead, they stuck to the forests as these landscapes became increasingly fragmented and degraded.

Forests have been lost through clearing for a range of purposes, but those that remain have also often been severely degraded by cattle and feral introduced species, like pigs and goats. As these animals thin the understory of the forest, crows are also exposed to increased predation by the Hawaiian Hawk (itself a threatened species). In addition, crows have been directly persecuted – shot, that is – by people, and introduced diseases like avian pox and toxoplasmosis have taken a terrible toll.

What makes this situation even more shocking is that it is a tragically common story. Of the 113 bird species known to live exclusively on these islands just prior to human arrival, 48 are thought to have been lost after (and presumably as a direct or indirect result of) the arrival of Polynesian peoples, and a further 23 since European arrival in 1778. This means that roughly two-thirds of Hawaii’s bird diversity is already gone. Tragically, of the 42 species that remain, 31 of them are, like the Hawaiian crow, federally listed under the Endangered Species Act (Leonard).


My new research project is situated in the shadow of all this extinction. In an effort to more fully understand the plight of the crow and its prospects for a life beyond captivity, as a part of this project I am focusing on the particular forests that these crows once inhabited, and might one day return to. I am interested in the various ‘ghosts’ that haunt this landscape – that is, in the legacies, histories, and frayed relationships that linger in the environment and ripple forward to impact on future possibilities for everyone.

For example, the force of the absence of crows is, itself, felt by many. As the island’s largest fruit and seed eating bird, there are now concerns that a range of tree species that previously relied on these birds for seed dispersal may be left in a tough spot (Culliney). If there is no one around to spread their seed – especially in the kinds of changing climates brought about by human presence and climate change – chances of long-term survival for these plant species are greatly reduced. Here, co-evolved affinities held in woody flesh become liabilities for those left behind. Like so many other plants who have been ‘abandoned’ by their pollinators or dispersers, these trees now stand at the edge of a precipice.

In her 2000 Book, Connie Barlow – picking up on work by Janszen – suggests that we might understand plants in this situation as ecological ‘anachronisms’: plants co-evolved with other species who are no longer present and so no longer able to take up the important roles in plant reproduction that they have previously. These disappeared animals are the ‘ghosts of evolution’. Absent, and yet lingering in the landscape in the form of the co-evolved affinities that are still present in the flesh of those left behind (at least for now). Examples abound of (at least possible) relationships of this kind – as explained in this short video (warning, the song is very catchy).

But this is not the only way in which crows haunt these forested landscapes. In other ways too, the ‘absent presence’ of the crow is felt by those that make their lives in the forest. While the legacies of the past presence are felt by some, the promise of a future return of crows is also a powerful pressure on management policy. Amongst other things, spectral crows demand a regenerated forest understory and so the exclusion and culling/killing of introduced pigs. These agendas now play a role in shaping possibilities for everyone: for example, impacting on the activities of pig hunters and others that might use this forest. In this context, some hunters have formed a small – but vocal – opposition to the return of crows (at least as it is currently proposed). Importantly, pigs were also amongst those species first brought to the islands by Polynesian peoples, and so for some people their continued presence is a matter of maintaining culture and tradition.

But all of these relationships can themselves only be understood within the context of the broader ecological, political and cultural histories that have shaped these islands and their forest landscapes. These histories also linger to play their part in the way in which various communities understand and value crows, pigs and the wider environment – and so, how they think about ‘conservation’. Importantly, these histories – especially long legacies of colonialism and federalism – have in some cases produced a deep suspicion about projects that involve the federal government ‘intervening’ in island matters on state and private lands.

And so, Hawaii’s forests are also haunted by these histories. Ultimately, whether or not crows make their way back into the wider world will be determined by the ways in which various human communities understand and inherit these histories. What do these trees matter, and how important are crows for them? How important are the crows themselves? Ought we to continue to make room for (feral) pigs on the Island of Hawaii, or should they be removed for the sake of the birds? Whose claims to island forests should be taken most seriously – and how are answers to this question coloured by past entanglements and inheritances?
Crows, people, pigs, trees and many others are tangled together here, at stake in each other. Paying attention to ghosts – to the missing presences, buried pasts and promised futures – that haunt landscapes like these is vital work for an informed conservation.

References
Leonard, D.L.J. 2008. “Recovery expenditures for birds listed under the US Endangered Species Act: The disparity between mainland and Hawaiian taxa.” Biological Conservation 141:2054–2061.