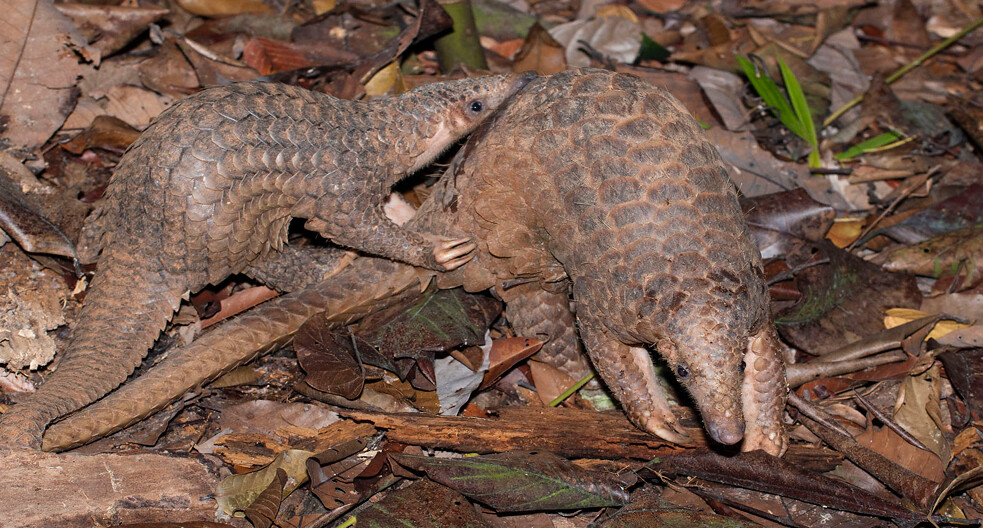 Our dysfunctional relationships with animals and the broader environment are increasingly creating the conditions for disease like COVID-19.

This post is the text of a short article published in New Matilda in on 22 March 2020.

It is quite possible that behind the current COVID-19 pandemic, lurks a pangolin. For those unfamiliar with these remarkable creatures, pangolin are scaly little anteaters that, when threatened, roll themselves into a tight ball. Eight species of pangolin are found in Asia and Africa; all are considered to be endangered to a greater or lesser extent, mostly as a result of the growing illegal trade that has made them the most trafficked wild mammal on the planet. Although their consumption is illegal in China, where the COVID-19 outbreak began, pangolins are frequently sold in the country where they are considered to be a culinary delicacy and a resource for traditional medicine.

Several genetic analyses of the COVID-19 coronavirus have determined that it has a high level of similarity, around 90%, with viruses found amongst pangolins. As a result, some scientists have argued that these animals are the most likely source of the first human infections—although if so, it is probable that it was passed to pangolins from bats, who are thought to be the natural hosts of coronaviruses.

But there is still considerable uncertainty about all this. As a recent article in Nature put it, pangolins have emerged as “a prime suspect, but a slew of genetic analyses has yet to find conclusive proof.” And so, the search continues for the animal origin of this pandemic. This hunt has important epidemiological consequences: understanding the source of the virus might provide important information about how it spreads and enable new interventions to control it.

Paying attention to pangolins is also an invitation to think more deeply about the consequences of our relationships with other animal species. The pandemic that we are currently facing is a symptom of a much larger problem. It emerges out of an increasingly dysfunctional relationship between human communities, other animals, and the broader environment.

Zoonotic diseases like COVID-19 are on the rise. Various studies over the past several decades have shown that the majority of emerging infectious diseases impacting on human communities around the world are zoonotic in nature, meaning that they are diseases that are naturally occurring in animals but that, under the right conditions, can be transmitted to people. Within this broad category are viruses and diseases like Ebola, HIV, SARS, and avian influenza.

When these pathogens spillover into human communities from their animal hosts, they do so for a constellation of reasons. Some of the key drivers have been shown to be habitat loss, the intensification of farming practices, climate change, and growing markets for bushmeat and exotic animals, including from so called ‘wildlife farms’. In short, many of the same processes that are giving rise to new zoonotic infectious diseases are also at the centre of our global biodiversity crisis and the mass-production of animal suffering in increasingly intensive farming operations.

Consider, for example, avian influenza (H5N1), which has periodic outbreaks in many parts of the world and is now considered to be endemic in some countries. This virus cannot readily be eradicated because it has what the World Health Organization refers to as a “vast silent reservoir in aquatic birds”. From them it is frequently passed to chickens, and then on to humans. While locking all your chickens up inside an intensive factory farm might seem like a good way to prevent them from being infected, research is increasingly showing that these very facilities are at the heart of this crisis. Chickens raised in these conditions tend to live in larger, denser, populations; they are also often less genetically diverse. In these conditions, avian influenza can more readily take hold and be spread further afield. In some cases, for example, it has been shown that the ventilation units from these buildings expel the virus into the air, and waste from them is spread on the land, in ways that facilitate the transmission of the disease to both wild and domesticated birds.

Or, consider Nipah virus. The first outbreak occurred in Malaysia in the late 1990s. Infected fruit bats, the natural reservoir for the disease, had been attracted to a high-density pig farm by fruit trees planted in the area. They infected the pigs who, in turn, passed the virus on to humans.

There is a tendency for discussions like these of animals and disease to be quickly racialized in a way that limits them to “other people”. We saw this, for example, with President Trump’s insistent framing of COVID-19 as a “foreign” disease. We also saw it more systematically with the 2003 SARS outbreak which was, as Jenn Fang put it, frequently presented as a product of “Chinese consumption of ‘weird’ meat and China’s ‘unsanitary’ practices.” While each of these diseases has its own particular story, the broader reality is that no part of the world has a monopoly on the kind of animal cruelty and destruction of animal lives and habitats that is today driving the production of zoonotic disease.

In this context, we might think about the ‘mad cow disease’ outbreak of the late 1990s in the UK. This disease arose out of the practice of ‘recycling’ the carcasses of cows and sheep into cheap, protein-rich, feed for other cows. Herbivores turned not only into carnivores, but cannibals. When humans consume the meat of affected cows it can lead to the development of a fatal degenerative brain disorder called variant Creutzfeldt-Jakob disease.

Likewise, there are numerous examples of zoonotic diseases emerging around the destruction of animal habitat all over the world. In Australia, Hendra virus, a close relative of Nipah, is similarly found amongst fruit bats. In recent decades, the virus has periodically spilled over into horses and from them into humans. Researchers have connected this series of events to new proximities created by the loss of fruit bat habitat as a result of deforestation and expanding agriculture. At the same time, fruit bats are experiencing new stresses as a result of a changing climate and persecution by orchardists and concerned communities. This stress, it now seems, might actually increase rates of Hendra infection and transmission.

In the US, West Nile Virus and Lyme Disease have similarly been linked to habitat destruction and biodiversity loss. In both cases, fragmented landscapes put people into more frequent contact with disease vectors—mosquitoes and ticks, respectively—while at the same time reduced bird and mammal diversity in the surrounding environment mean that these vectors are feeding more frequently on the reservoir species, and so are more commonly carrying these diseases.

In a host of different ways, we see that human relationships with animals are driving the emergence of zoonotic infectious diseases. These diseases are the result of animals living lives of confinement, of deprivation, and of stress – and doing so in greater proximity to humans and a growing variety of other species.

This situation is partly the product of a growing human population in need of ever more food and land. But it is also a product of a desire to consume more and more meat and animal products, both overall and per capita, and to produce these resources as intensively and cheaply as possible. As if climate change wasn’t already enough of a reason to curb these appetites, we are now seeing that they come with a host of other problems.

So, the pangolin that may or may not be the source of the COVID-19 coronavirus is in no way an exception. If it does turn out to be the unwitting and unwilling culprit behind this pandemic, this unlucky animal will join a long list of others whose life was cut short, whose species was endangered, and whose environment was destroyed, by a diverse range of ongoing human activities that are simultaneously helping to engineer new zoonotic diseases.

Perhaps, as those of us who can are retreating to our homes for a period of self-isolation, we might spare a moment for some introspection on the broader relationships that have produced this crisis. Many commentators are drawing our attention towards the social drivers and human impacts of this pandemic: including the various forms of inequality and access to health care that allow these diseases to take hold in individual bodies and broader communities. These are vital considerations. But they are not enough. We must also consider our relationships with other animal species, what we owe to them, and the world that is being ushered in by our widespread failure to devise ways of living well in this broader community of life.