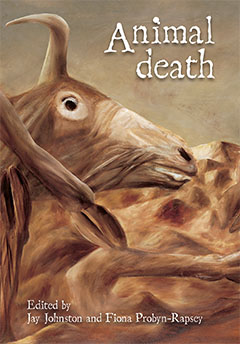 Last week I had the pleasure of launching a new book called Animal Death, edited by Jay Johnston and Fiona Probyn-Rapsey (Sydney UP, 2013). The little speech that I gave about the book is reproduced below.

I’d like to start by thanking Fiona and Jay, for this wonderful book but also for the conference that it emerged out of.

It seems appropriate to be launching this book at yet another conference that Fiona has played a key role in organizing. This book now joins these incredibly successful conferences as part of the really significant contribution that Fiona, Jay, and others at HARN are making in the development of animal studies as a field of scholarship in Sydney, Australia, and beyond.

I was delighted to be asked to launch this book. I attended that Animal Death conference and am so pleased to see that it has produced such a diverse, provocative and challenging book. It is also great, I should say, to get the expanded version of so many of the ideas that we just glimpsed at the conference; a result of the tyranny of 20 minute presentations.

More than anything else, this book highlights the dire need for animal studies to take death seriously. Killing, is of course, a central part of the issue here – but by no means all of it.

Death has so often been taken up in the history of western thought to assert and reinforce a division between ‘the human’ and ‘the animal’. In some cases, it has marked an incidental but significant distinction; in others it has been seen as the site of a fundamental and even constitutive difference.

For example, in Heidegger’s though death is a central part of what Matthew Calarco calls the “abyssal divide between the Being of human beings and that of [other] animals,” Death is a core component of the way in which Heidegger articulates a “a gap and a rupture that is utterly untraversable” (p. 22). Of course, for Heidegger the key issue here was the way in which living beings orient themselves towards their ends. The human is unique in its capacity to ‘die’ – in the full sense of the term. Other animals certainly ‘perish’ for Heidegger – in the sense of coming to an end – but only we humans are able to consciously oriented ourselves towards our deaths. Heidegger’s though here rests on a long tradition of ‘human exceptionalism’: Voltaire told us that “The human race is the only one that knows it must die,” while according to Schopenhauer, “Unlike man, animals, so to speak, live without knowing death.”

In all of these approaches to death, a divide is reinforced between ‘us’ and ‘them’. But death has been taken to mark this divide in other ways too. In some places, at some times, humans have been viewed as the only possessors of an immortal soul – and so the only beings whose deaths matter, ethically and theologically. In the absence of a soul, other supposedly distinctive human features have done this work, marking out our deaths as the only genuinely significant ones.

And so, across a broad range of philosophies in the west, the role of animals in thinking about death – as in so many other contexts – has been as a foil for thinking ‘the human’. Indeed, it seems fair to say that whenever animals have been mentioned in the same breath as death in western philosophy (at least until very recently), it has inevitably been to distinguish something unique about human life, knowledge or experience, something that sets us apart from the rest of the animal kingdom.

In this context, this book is an important intervention into this long history. Across its 17 chapter it comes at the question of death in a range of provocative and insightful ways. Like the conference that it emerged out of, this is a distinctly interdisciplinary collection. Contributors come from and draw on a range of fields, including philosophy, literature, studies in religion, cultural studies, art, veterinary science and law.

Across many of these essays there is a shared passion for thinking about death in ways that draw us into company with all of the other animals, rather than setting us apart in yet new ways. There is a passion for what James Hatley has called our shared “creaturely existence,” as well as for the kinds of responsiveness and responsibility that it might provoke.

Animals are encountered in this book across a dizzying array of sites: in the zoo and the laboratory, the abattoir and the factory farm, in sites of conservation, extinction and hunting, as pets and as works of art or even collaborators in artistic projects.

Hilda Keen takes us into the pet cemeteries of London, New York and Paris to think about memorialisation, mourning and shared lives that endure even after death. Carol Freeman explores the real and imagined deaths of thylacines and the extinction of their species, in particular as represented in the book and film, The Hunter. Meanwhile, Chloe Taylor focuses on what it might mean to show respect to the dead themselves. While many of our discussions of death focus on the ethics of killing, Taylor asks after respectful interactions with those already gone. Her fascinating analysis focuses on the way in which ‘using’ dead animals – rather than wasting their bodies and perhaps their deaths – has come to count as respecting them, while those forms of respectful treatment adopted in relation to the human dead are often seen to be inappropriate or overly sentimental. In her conclusion, Taylor highlights a framework of thinking that is perhaps another instantiation of Robert Nozick’s now famous assertion of “utilitarianism for animals and Kantianism for people” – although in this case it is dead bodies that are the subjects of these ethical encounters.

The chapters in this book also present a diverse range of intimacies between animals and humans: we encounter animals as members of the family, as food, as labourers or resources, and much more. Importantly, however, animals also emerge from the thick description of many of these essays in ways that cut across these simple classifications. Perhaps my favourite example of this in the book is Rick De Vos’ engaging ethnography of changing relationships between huskies and their humans in Greenland in the context of climate change and a range of other interventions into local lives.

In his chapter, Matthew Chrulew takes us into a borderland between life and death. His exploration of zoological gardens, and in particular their 20th century “modernization”, charts the transformation of these sites from places of spectacle administered with “blunt sovereign instruments,” to facilities governed by the “detailed, individualized care of biopower.” Chrulew shows that in their early days zoo animals were, in his words, “left to wounded lives and routine deaths, made to survive yet unable to thrive.” Clearly a lot changes in the intervening years, much of it for the better, and yet the picture that he paints is very far from one of simple improvement.

And so, I see this book as a series of snapshots into some of the many ways in which animal deaths are taking shape in the worlds that we inhabit together. This book asks us to “care to know” about animal deaths – as the editors put it in their introduction. Not just to acknowledge that we all die sooner or later, but to dwell with that often uncomfortable reality in the specificity of its actual occurrences. To ask after who dies, when and how they die. Do they die en masse, of in an horrific manner? Are we even able to dwell with that knowledge and how is that death for so many of us today – quoting the editors – “obscured, minimized, and rendered morally distant by cultural design.”

The essays in this collection seek to pull death out of the background of daily life, to bring it centre stage and ask readers to sit with the deaths of others a little while. To take animal death seriously for all of its ethical, cultural, political, and perhaps even aesthetic, lessons and responsibilities.

This collection is a remarkable achievement. It is sure to become necessary reading for anyone interested in death, but also for animal studies more broadly. Indeed, as I mentioned at the outset, one of the key lessons of this book is that reckoning with death is central to thinking through human/animal relations; to thinking through who animals are, who we are (as animals), as well as how we might all get on together in this shared world.

So, I’d like to again thank the editors of this collection – Jay Johnston and Fiona Probyn-Rapsey – for putting together such a wonderful collection and such an engaging conference. I’d also like to thank the many talented contributors to the book – several of whom are here with us today.

And with that, I’m very pleased to officially launch this book, Animal Death.